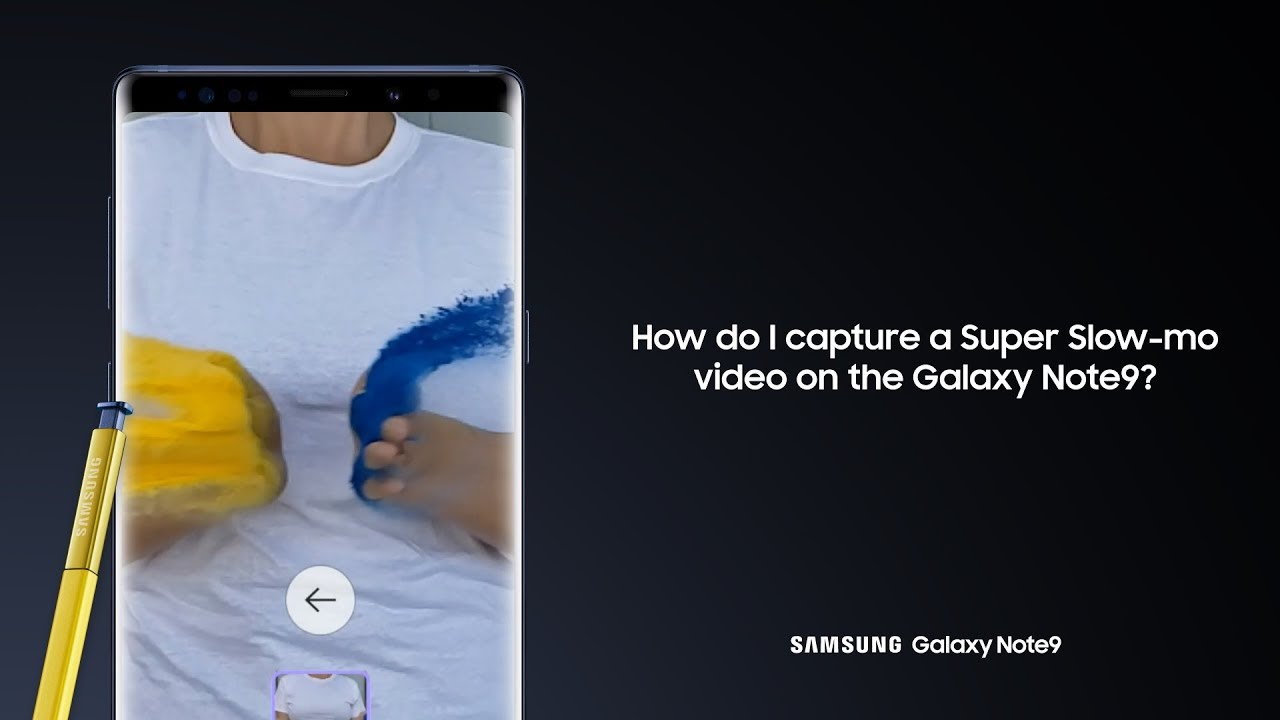 The quality of the slow-motion video depends mainly on how many frames it captures during each second. If the camera shoots more frames than the media player can play back, you will be able to make long stretches of slow-motion footage.

Most content plays at 24,30 or 60 frames per second. You must shoot more frames per second to achieve slow-motion effects than the media player can display. This requires either a faster chipset or more memory on the camera sensor. For example, the iPhone XS Max supports up to 120 frames per second, while most smartphones can record around 60 fps.

You can use the burst mode feature to achieve fast-action shots, such as sports highlights. With burst mode enabled, the phone continuously records images at a fixed interval, typically 10 times per second.

We recommend shooting at least 240 frames per second for the best possible image quality. You can set the camera to continuous autofocus and autoexposure modes.

How to Edit a Slow-Motion video?

Slow-motion videos are captured at a high frame rate, typically 120fps, 240fps, or even higher. The resulting video is then played back at a standard frame rate, such as 30fps or 60fps, which makes the action appear slower than it is.

If you want to edit a slow-motion video, there are a few things to remember. First, ensure that your video editing software supports the high frame rate of your footage. Second, pay attention to the playback speed of your footage when editing – if it’s too slow, it will look unnatural, and if it’s too fast, it will just look like a regular video.

How Does Slow Motion Works?

This is done by increasing the frame rate of the video capture. For example, a 1080p video can be captured at 120fps, which gives the ability to capture slow-motion videos at 240fps. However, this is limited to 720p videos at 120fps.

Slo-mo video is a popular trend; people love watching movies captured at super speed. Everyone wants to see what it feels like to run fast or jump high, from sports to action films. While smartphones offer excellent slow-motion capabilities, it is still difficult to achieve quality results. Many factors affect the quality of a slow-mo clip. Getting something worth sharing online might take hours if you don’t know how to do it. Here are the 10 best phones to record slow-motion videos in 2022.

Galaxy Note 9 is a smartphone with a sensor feature to help you record the best video. This phone’s users can take quality videos in 720p resolution on 960fps. The software on this smartphone enables you to edit your slow-motion video and lets you create a GIF so that you can send it to your friends. It captures a video at 1080p up to 240 fps. Galaxy Note 9 is one of the best slow-motion camera phones launched recently.

Sony Xperia X2 can record a slow motion video at 960 fps on up to 1080p resolution in HD and FHD. Unlike Samsung phones, Sony smartphones record videos manually through a camcorder and capture exactly what you want to record.

iPhone XS Max camera makes an HD slow motion video, but it is limited to 240 fps. However, the quality of the videos is the best, and it does not let your videos suffer from the noise. The slow speed of videos helps you generate the quality of your desired video. But you better invest in a professional quality camera phone with 960 fps to get more compact and flawless results.

Asus Zenfone is another good option for those looking for the best slow-motion video recording smartphones. However, it offers you 240 fps for full HD video recording. But, it is better to invest in some other advanced model.

This smartphone comprises a built-in artificial intelligence AI with an innovative camera. This Smartphone slow motion camera makes quality HD videos at 240 fps with sensors that allow G7 to capture them in slow motion.

Sony’s Xperia Pro-1 is the first smartphone to shoot 4K video at up to 120 frames per second. This allows you to capture slow-motion video without having to use a tripod. It uses the same hardware found in the Xperia XZ Premium — including the Exmor RS sensor, Qualcomm’s Snapdragon 888 processor, and camera features like the dual-pixel autofocus system and Sony’s SteadyShot image stabilization technology.

The Galaxy S22 series, however, features a different design language than the rest of the Galaxy lineup. This includes a glass body with rounded corners, similar to the iPhone XR. These smartphones also come with a pop-up selfie camera on the front, just like the Galaxy Note 10.1 tablet.

While the phone looks like a Galaxy S20 series device, some differences are worth mentioning. For starters, it does not have a headphone jack. There are no physical buttons either, except for volume controls. Instead, you’ll find a virtual button setup on the left side of the display.

There’s also a third camera on the back of the device – a 16MP f/1.9 super-resolution depth sensor. You can use this to take 3D photos and measure distances up to 2 meters away.

In terms of software, all three devices run Android 9 Pie out of the box, although Samsung has tweaked the UI slightly. On the lock screen, you’ll notice a new “Smart Switch” option, which allows you to quickly switch between apps without having to unlock the device.

Xiaomi launched its next flagship smartphone, dubbed the Xiaomi 12 Pro, at MWC 2018. This device is expected to come with a triple rear camera setup, a 5.99-inch display with a resolution of 2160×1080 pixels, Qualcomm Snapdragon 855 SoC, up to 256GB storage, and a 4000mAh battery.

The upcoming handset will be based on Android 9 Pie OS out of the box. A few days ago, we reported about the upcoming Xiaomi Mi 10, which will feature a similar design and specs.

This time around, however, the Chinese manufacturer plans to release a dual-camera variant of the upcoming Xiaomi Mi Note 10 Pro. The latter will sport a 48MP primary sensor paired with a 13MP secondary one. In terms of optics, it will use Sony IMX586 sensors and an f/1.8 aperture lens.

In addition, the upcoming Xiaomi Mi Note 20 Pro will be equipped with a 48MP primary sensor and a 16MP ultrawide angle lens. Both devices will run MIUI 11 out of the box.

Huawei’s flagship smartphone, the Mate 40 Pro, has been announced ahead of Mobile World Congress 2018. This device features a quad-camera setup on the rear, including a 50MP primary shooter, a 12MP telephoto lens, a 2x optical zoom lens, and a 20MP super wide angle lens. A front-facing camera is a 16MP unit with an f/2.0 aperture.

The Mate 40 Pro runs Android 9 Pie out of the box and sports a 5.99-inch OLED display with FHD+ resolution. Under the hood, a Qualcomm Snapdragon 710 SoC is coupled with up to 8GB of LPDDR4X RAM and 256GB of internal storage. There’s a microSD card slot for additional memory expansion. A 4500mAh battery keeps things running smoothly.

If you want to make slow-motion videos, the OnePlus 8T is the best phone. It doesn’t hold up well against the Samsung Galaxy S20 Ultra or Huawei Mate 20 X, but it offers good performance and a great camera experience.

The device packs a 48MP primary camera, a 16MP wide-angle lens, and a 5MP macro lens. Its rear camera setup uses the same dual-pixel autofocus technology as the OnePlus 7T Pro. This allows you to focus faster and capture sharper images.

The front camera features a 16MP shooter, while the selfie cam offers a 120-degree field of view and a 5x zoom. You’ll find a headphone jack and a USB Type-C port on the bottom edge of the phone. There’s no 3.5mm audio jack here, either.

OnePlus 8T comes with a Qualcomm Snapdragon 865 Plus processor, with 12GB RAM and 256GB storage capacity. An extensive 4000 mAh battery powers the device. The handset runs Android 10 out of the box and supports wireless charging.

Sony’s flagship smartphones have consistently included state-of-the-art camera hardware and software. The latest offering, the Xperia 1, is no exception. The handset features a 20MP rear camera capable of shooting up to 960 frames per second – almost twice the playback speed of what Samsung offers with its Galaxy S10+. This allows you to capture short clips at 960 fps, though only 0.1 seconds worth of video can be stored at that resolution.

The Xperia 1 also boasts a 16MP front-facing shooter with F/2.0 aperture and optical image stabilization. You can record 4K video at 60 fps, too. In addition, the smartphone supports Super Slow Motion recording at 120 fps, 240 fps, 480 fps, and 720 fps. There are three video modes to choose from: Time Lapse videos, Action Cam, and Sports.

In terms of storage, the Xperia 1 sports 64GB of onboard memory, expandable via a microSD card slot.

Asus’ latest flagship smartphone, the 6Z, is a beast of a device. This is because it packs a large 5500 mAh battery inside, a 48 MP Sony IMX586 sensor, a 12 MP wide-angle front-facing shooter, and a 16 MP ultra-wide-angle rear camera. These features make up what I’d call a “good compromise” since you get good photos and video while keeping battery life high.

The 6Z looks excellent, thanks to its sleek design and metal body. Its impressive display features a 19.5:9 aspect ratio and a 2160 x 1080 pixels resolution. However, the dual cameras, the 6Z can record 4K HDR videos at 60 fps.

The 6Z also sports a USB Type-C port, 3.5mm headphone jack, and a fingerprint scanner under the home button. You’ll find a dedicated Google Assistant key on the side panel, which makes sense, given that Google owns Asus. You can choose among three color options – Black, Gold, and Rose Gold.

The iPhone 13 and 13 Pro are already launched. They come with three cameras: a wide-angle lens, a telephoto lens, and a 12MP sensor. Notably, the latter features optical image stabilization (OIS). There are four models in total: iPhone 13, iPhone 13 Max, iPhone 13 Pro, and iPhone 13 Pro Max.

Slow motion video has always been one of those things that you either love or hate. For example, some people think it looks fantastic while others find it annoying. Some people like the idea of being able to see what happened during a scene without having to watch the whole thing again. Others don’t care because they’re just watching TV anyway.

While slow-mo technology has become increasingly popular over the past few years, the footage quality hasn’t improved much. This is mainly because android smartphones haven’t gotten any faster at recording video. They still use the same hardware as they did five years ago. As a result, the quality of slow-mo videos shot on phones today tends to look pretty poor compared to what you’d see on a high-end DSLR camera.

That being said, there are times when you do want to see something happen quickly, such as when someone hits another person or when a car crashes into a wall. In that case, you might enjoy seeing the action unfold slowly rather than fast. However, I wouldn’t recommend buying a phone solely based on how well it does in this category. Many other factors should play a role in your purchasing decisions. In the comment section, tell us about your video recording experience with slow-motion smartphones.

WhatsApp Dark Mode: How to Enable on Android and iOS?